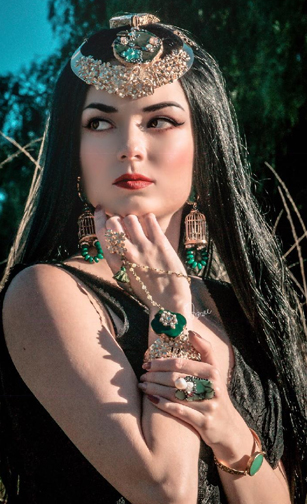 San Francisco-based luxury jewelry brand Wasée Jewels will present its latest creations at Couture Fashion Week New York’s 29th season. Marking the brand’s first appearance at the prestigious event, the jewelry will be shown along with the the most recent collection by fashion designer and event producer Andres Aquino at 8 pm on Saturday February 16, 2019 at the 4W43 Building, 4 West 43rd Street in New York City.

The creative force behind the Wasée Jewels brand is designer Farah Ghatala. According to the designer, “Our jewelry is a manifestation of who you are, our creations tell a story — a story you can wear. Your uniqueness shines through in our exclusive chic designs.” All of the stunning jewelry pieces are hand-crafted in the Wasée Jewels Silicon Valley studio.

Wasée Jewels has been worn by celebrities at major red carpet events including award-winning producer and TV personality Lika Osipova at the Emmy Awards, and “Minority Reportz” producer and comedian Mona Shaikh at the Top 1000 Comedians Awards.