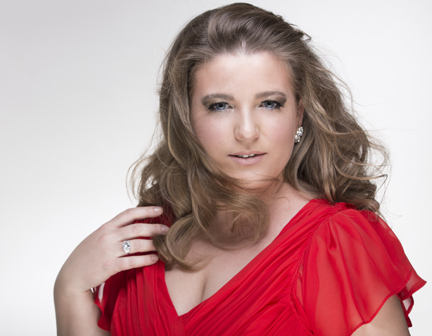 Renowned mezzo soprano Benedetta Orsi will perform during the upcoming 26th season of Couture Fashion Week New York. Marking her first appearance at the prestigious event, Ms. Orsi will perform at 8:00 pm on Saturday September 9 during the Andres Aquino fashion show, and at 6:00 pm on Sunday September 10, 2017. The event will be held at the Crowne Plaza Times Square Manhattan, 1605 Broadway, New York City.

A laureate of the 2012 Barry Alexander International Vocal Competition, mezzo soprano Benedetta Orsi is a graduate of the Regia Accademia Filarmonica di Bologna in the studio of tenor Sergio Bertocchi, and is also a graduate of Modena’s Istituto Musicale Pareggiato Orazio Vecchi. She has participated in master classes with Marilyn Horne, Luciana Serra, Fred Carama, Chuck Hudson and Teresa Berganza, who defined Ms. Orsi as “a perfect voice for bel canto.”

No stranger to the stages of Carnegie Hall, Benedetta Orsi is one of only a few contemporary mezzo sopranos to have performed all three of Donizetti’s Tudor Operas: Jane Seymour in Anna Bolena, Elisabetta in Maria Stuarda and Sara in Roberto Devereux with Manchester’s Royal Northern College of Music Theatre. Recent performances also include the role of Maddalena in Rigoletto with Amore Opera, Ulrica in Un Ballo in Maschera with the Miami Lyric Opera, Mamma Lucia in Cavalleria Rusticana with the New Jersey Festival Orchestra. Other appearances include the title roles in L’Italiana in Algeri and Werther, Azucena in Il Trovatore and Teresa in La Sonnambula. Her latest Carmen in St. Louis was called “totally convincing as the most desirable woman in Seville. With a dark, sensuous voice and a lubricious stage presence, her Habanera exudes a smoky sensuality that dominates the stage”.

Ms. Orsi’s latest album, Christmas Around the World, was awarded the Silver Medal at the Global Music Awards as Best Album and Best Female Vocalist. She is working on her new recording to be released in 2018.