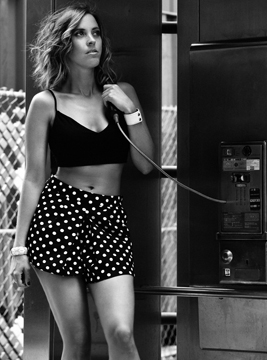 European singing sensation Shana Pearson is set to perform at the next Couture Fashion Week New York. Part of the prestigious event’s 22nd season, Ms. Pearson will perform at 4:00 pm and 8:00 pm on Sunday September 13, 2015 in the Broadway Ballroom of the at the Crowne Plaza Times Square Manhattan, in the heart of the Big Apple.

Half American half Swiss, Shana Pearson (previously known as Shana P) is a pop singer and songwriter based in Switzerland. She has released two albums: Regarde‐Moi in 2009, which received a Gold Disk in February 2010 reaching 10,000 albums sold, and Love Inferno released in 2013, exclusively on digital platforms. Her video of Regarde-Moi has over 1.1 million views on YouTube. 2011 saw a turning point in her career as it was marked by her collaboration with famous DJ and party rocker Big Ali. He invited Shana to perform on his smash hit Electro‐Dance single Distress, which was influenced by the iconic hit song Message in a Bottle by The Police. Shortly after, Sting gave his approval to use the song, and Shana and Big Ali flew to Miami to shoot the music video. They went on to tour for more than 20 dates all around France and Switzerland before thousands of people, including an audience of 30,000 in Corsica. In the summer of 2011, Distress rose to second position on the charts for several weeks. In 2013, Shana performed for Justin Bieber’s support act along with Big Ali in Strasbourg, France. Shana Pearson is now working on a third album as an indie artist. Having already done numerous concerts outside of Switzerland (France, Belgium, Czech Republic, Thailand, and Algeria), Shana hopes to expand her music beyond.