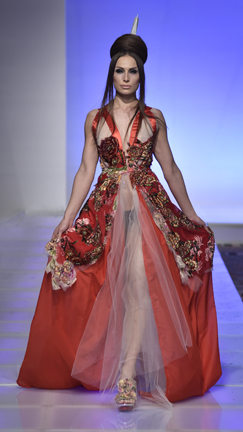 “Tour du Monde” is a capsule-type collection that never goes out of fashion. It is as timeless and stirring as the memories of one’s soul-enriching travels around the world, from the iconic Côte d’Azur and Saharan sunsets to the centuries-old cathedrals, boulevards and royal gardens.

As has become customary in the past few seasons, two of Alexandra Popescu-York’s latest monumental (140 square feet) paintings will serve as background pieces for the “Glamour Rush” fashion show by Couture Fashion Week producer and designer Andres Aquino, a great aficionado of Ms. Popescu-York’s art. That show will be held at 8:00 pm on Saturday September 10, 2016.

A native of Bucharest, Romania, Alexandra Popescu-York is a New York City-based designer and artist, a world-class power acknowledged by the industry’s best early in her career. Among the numerous accolades she has garnered is the recent inclusion of her paintings in the United Nations’ 70th Anniversary International Art Exhibition in New York. Ms. Popescu-York’s humanitarian efforts have earned her the “Ambassador of Good Hearts and Romanian Culture” title. Ms. Popescu-York is also known as Alexandra Suciu in her double role as wife and mother. Her sons Alexander Julian and Ralph have walked the Couture Fashion Week runway.

Ms. Popescu-York’s fashion creations are characterized by each piece’s symbolic depiction of finely selected themes. Recent themes include “Unleashed” (a rich collection of garments and accessories with a glamorous avant-garde look that is as edgy and unique as the eponymous New Yorker), “Âme de l’artiste” (soul of the artist), “Phoenix – The Legend”, “Metropolitan” (inspired by art, history and civilization highlights from the Metropolitan Museum of Art), and “GranD’Or”, a collection based on Ms. Popescu-York’s own artistic creations.